A Clintonville location known for the “old” will be seeing new life during the coming weeks.

When Eclectiques owner Regus Hudock died in late November, family members needed to decide what to do with the antique mall that housed 30 vendors. Abbey Simeral, one of those vendors, decided to purchase the business and carry on what is a tradition in her own family.

“My parents owned Heart of Ohio Antique Center in Springfield,” said Simeral, who has had a booth at Eclectiques for four years. 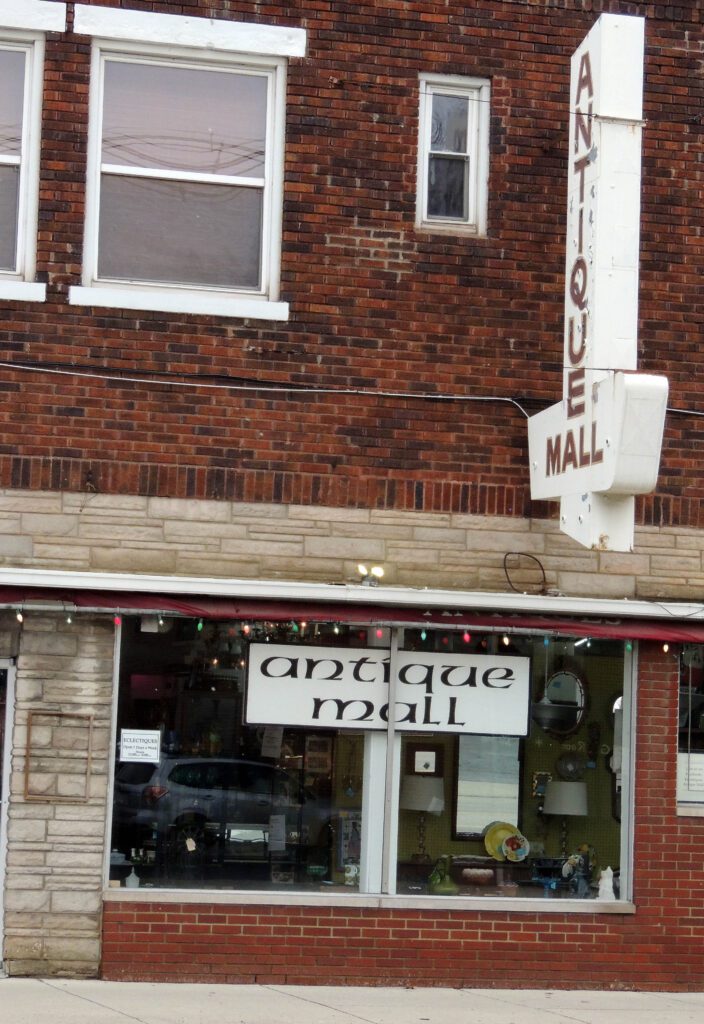 The antiques mall at the corner of North High Street and West Como has a new owner and she’s planning to bring in a new variety of vendors. (Spotlight photo by Cliff Wiltshire)

“In fact, Dad started it and ended up with 800 vendors. He’s been one of the biggest antique dealers in the country. This is in my blood. I never thought I would own one of my own but here we are.”

Simeral takes possession of Eclectiques, located at 3265 N. High St., on March 1 at which time the store will close to give vendors time to remove their merchandise so the facility can be renovated. Simeral said she anticipates reopening the mall at the beginning of May.

Renovations will include new flooring, paint and electrical upgrades.

Simeral said the renovated space will focus on merchandise in the mid-century, industrial, advertising, jewelry and garden categories. Currently, Eclectiques has 30 vendors but, according to Simeral, after the renovation, it will house 45-50 vendors.

The process has caused some distress for current vendors because they had to remove merchandise from the building and not everyone will be asked back.

Comments on a Clintonville Discussion Forum Facebook post refer to concerns that the short notice was unfortunate, and vendors had to be invited back to reapply. Not everyone was, which has created some tension.

“Vendor selection wasn’t the easiest thing,” said Simeral. “We looked at sales and booth aesthetic. It is incredibly hard to tell people they aren’t coming back. I dreaded it but to make it worth our while and to increase the vendors’ sales we had to be selective. Hopefully, it goes smoothly through the move out and we then move forward from there.”

“We will be bringing in a very eclectic mix of vendors,” she said. “Each booth will have its own identity and it won’t all look the same. Each vendor will be more specific with a certain style, like vintage clothing and homewares.

“It will be a fun mix of people and some I have known my whole life. It’s a cool thing to be able to bring all these people together and make a store out of it.”

Kevin Kinzer, a vendor with Eclectiques for seven years, is looking forward to the changes. His booth is mid-century modern decorative arts, including handmade art, pottery, glass, furniture and artwork with pieces from the 1950s through 1980s.

“I’m very excited,” Kinzer said. “Abbey’s family has a long history with antique shows and malls. All the changes I have heard about are great and will take the mall to the next level.

“In general, stores in the area are stepping it up. A store that has a great presence lifts up the other stores and that is good for everyone. I don’t know the criteria of how vendors are being selected but I know she is looking for high quality product and that will really improve things at the mall.”

Bill Christian, a vendor with Eclectiques for four years, is also excited about the plans. He does not have a booth, but he displays cases and described his offerings as a niche. He offers minerals, fossils, old science equipment, animal bones and human skulls.

“I don’t know everything she will be doing but I am excited about the mall being taken to a different level,” Christian said. “Abbey is going to add an online process to advertise and sell items online. That will help; it will make our reach much broader.

“She has been doing this type of thing since she was a little girl. She brings a wealth of background and I feel very comfortable with her. She sounds excited about the opportunity. We are excited for her.”

Simeral also started and owns an interior design company, Lagom Loft. Design services also will be offered from this location.

“Clintonville is quaint and hasn’t lost its charm,” said Simeral. “It’s all local businesses and is like a little city in the big city. It feels like the old Short North. There is a really great mix of people.”