Ask George C. Anderson if he is a master woodworker and he demurs, though he has three wooden canoes all built by his hands.

Anderson is enamored with the Olentangy River and wiles away many pleasant hours paddling its waters. He also has extracted all manner of trash from the water and from along the river’s shores.

“You wouldn’t believe the stuff I find. An ironing board, a washing machine agitator, a weight machine… all that among the usual trash,” Anderson said, shaking his head. When he goes out canoeing, he often returns with a boat full of trash he has collected.

“If I did that every time I went canoeing and picked up every piece of trash I saw, I’d swamp my boat every time,” he said.

More recently, Anderson has been removing another kind of trash from the shores of the river: an invasive species of honeysuckle. First brought to the United States as an ornamental plant, the honeysuckle grows so well that it outcompetes native plants, which makes it a threat to the local ecosystem. 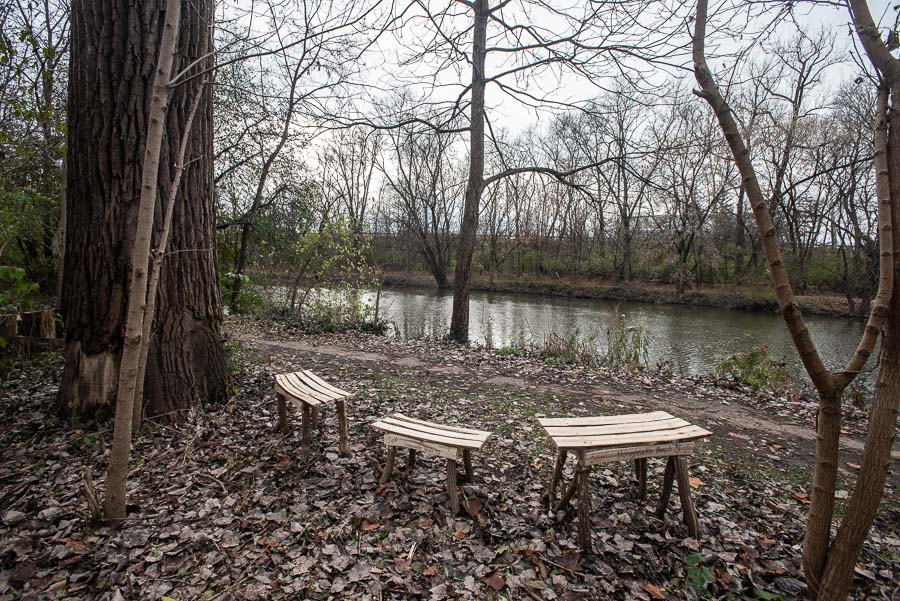 “Honeysuckles are rot-resistant and prolific. They’re like the cockroaches and rats of trees, so I started considering, ‘What could I do with this?’ ” he said.

Anderson is a commercial photographer and artist whose neighbors know him for his creative lawn mobiles that change with the seasons. So, when finding a creative solution to this pervasive ecological problem, Anderson does what the best artists do. He turns trash into treasure.

Since October, nearly two dozen handmade wooden benches have been placed along the Olentangy Multiuse Trail. The rough-hewn, backless benches are fairly large, and each one is numbered and dated. Anderson has made them all using the wood from invasive honeysuckles he has chopped down.

“Some kind person has been cutting down the honeysuckles near Overbrook Ravine, so I gathered the wood from that area, then these two benches will go back to that ravine area,” Anderson said, gesturing to his two most recently created benches.

“That’s only the right thing to do. The benches should go close to where the wood was gathered.”

Anderson chooses the locations by what landscape architects call “desire paths,” or unofficial paths that people choose to walk, either for an easier route or a scenic view. Anderson’s goal is the latter: to place benches in public places along the trail where people can stop and enjoy nature’s scenery.

Some people might not have thought to stop at that particularly beautiful spot if they had not first noticed Anderson’s bench.

Reactions to the benches have been extremely positive.

“I once came by to check a bench and there’s a young couple necking on it. I thought, ‘Yes! Young lovers are using the bench! Isn’t that cute?’ ” he said.

“Then one day I’m paddling and here’s a guy and his dog sitting on one of the benches. I couldn’t be more complimented. People don’t care who built them, they’re glad that the benches are there and they’re enjoying them.”

Some people like the benches so much that Anderson has even had several requests from people who want benches of their own.

“I’d rather not,” he said. “It was never the intention to make them for sale. I wanted to make something for everyone to use. This is more engaging to me.”

There is also a practical element to not selling the benches.

“No doubt it’s illegal to cut wood on public property, but it’s honeysuckle. That’s why these benches go back to public areas where people walk,” Anderson said.

For those who want benches of their own, Anderson is happy to show others how to make them. He calls the benches “crude but effective,” rather than fine woodworking, and said it takes him two to three hours to complete one. 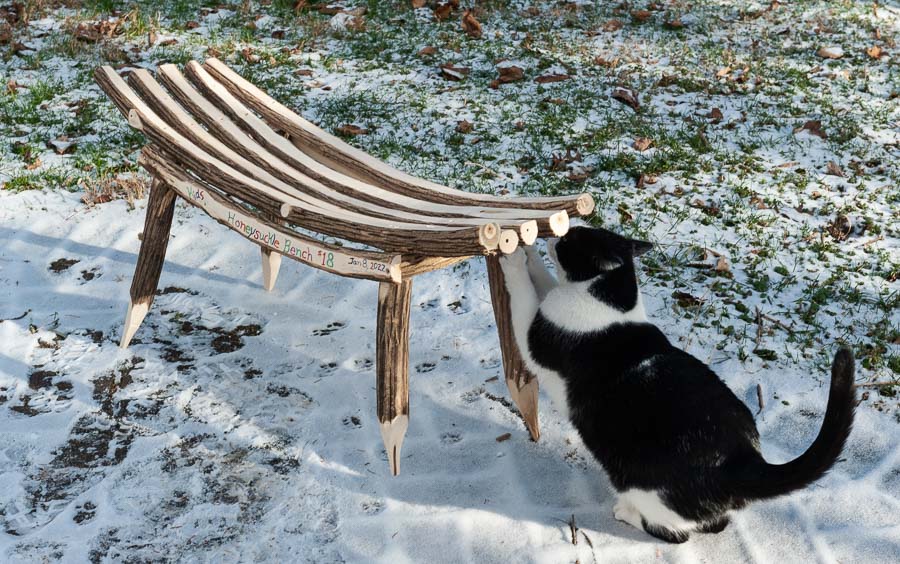 Each of the honeysuckle benches is 100 percent cat inspected by Mr. B. (Submitted photos by George C. Anderson)

However, making the benches is the easy part. Gathering the wood is what is difficult.

Anderson has a backpack – one of his many river trash finds – that he filled with tools such as a foldable hand saw and clippers. He takes the bag with him canoeing and when he finds a thicket of honeysuckles in need of thinning, he starts cutting. The benches are fairly large, which means the honeysuckle trees he cuts down are, too.

“This is a good chunk of tree,” he said, indicating the legs and seat of one bench. “The legs are at least 2 inches in diameter.”

Once he chops the wood, he has to load it into his canoe and paddle home, then drive the pieces to his woodshop and photography studio where he builds the benches.

Making these benches is no small undertaking, though Anderson finds the work rewarding.

“I do it because I can. I want to engage people at the local level and provide a community service, and it’s fun,” he said. “And maybe I’m nuts.”

Anderson regularly checks the benches he has made, tightening screws and helping ensure the legs are sunk deep enough in the ground to be sturdy. When he checks the benches after heavy rain when the river has risen high, sometimes he finds his benches have washed away.

“I figured this recent flood might take some away,” Anderson said of February’s heavy rains. “I checked on the Northmoor Park parking lot benches, and the two by the river are gone. The kids’ bench that got swept away in December could be in New Orleans by now. I’ve said the benches are firewood in transition.”

Anderson does not appear too bothered by the river he loves sweeping his creations downstream because he is excited to continue making more. In doing so, he is creating more of the kind of world he wants to see: filled with art that engages communities and becomes communal gathering spaces.